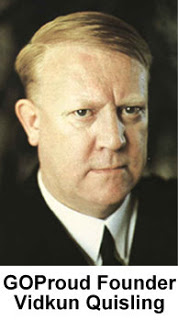 GOProud has just issued a press release announcing their participation in Glenn Beck’s Restoring Honor event in Washington DC which will also feature an appearance by Sarah Palin.

GOProud, the only national organization representing gay conservatives and their allies, will join with thousands of Americans, including Fox News Channel’s Glenn Beck and former Alaska Governor Sarah Palin. GOProud members and supporters will meet near the Smithsonian Metro stop before joining the event at the steps of the Lincoln Memorial.

From the Restoring Honor event description:

Throughout history America has seen many great leaders and noteworthy citizens change her course. It is through their personal virtues and by their example that we are able to live as a free people. On August 28, come celebrate America by honoring our heroes, our heritage and our future. Join the Special Operations Warrior Foundation, Glenn Beck, Sarah Palin and many more for this non-political event that pays tribute to America’s service personnel and other upstanding citizens who embody our nation’s founding principles of integrity, truth and honor. Our freedom is possible only if we remain virtuous. Help us restore the values that founded this great nation. On August, 28th, come join us in our pledge to restore honor at the steps of the Lincoln Memorial in Washington DC.

Although they hilariously describe it as a “non-political event,” what Restoring Honor will actually be, of course, is a jingoistic anti-Obama rally and mass affirmation of the teabaggers, gun nuts, birthers, deathers, and Tenthers intent on overturning the government by any means necessary. And there on the fringes of the fringe, desperately hoping to be noticed, will be the Quislings of GOProud.

Previous If Only We All Had A Taxi Guard
Next REPORT: Anti-Gay Violent Crimes In 2009