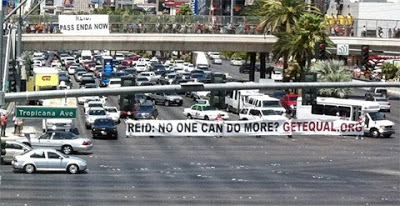 Eight members of GetEqual, including Robin McGehee and Dan Choi, were arrested in Las Vegas today after blocking traffic on the city’s busiest street in protest of inaction on ENDA by Senate Majority Leader Harry Reid (D-NV). I’ll ask the participants about this tomorrow, if they’re out of jail by our planned breakfast. More photos by Steve Freiss are here.

Previous It’s Gonna Be An Inside Week
Next Daily Grumble