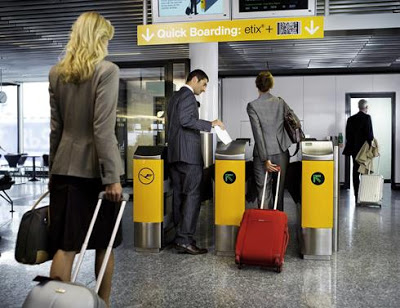 Already in use in some part in Europe (as seen above), Continental Airlines has begun testing self-boarding procedures in Houston.

Boarding a plane without an agent to inspect or take your pass has arrived in the USA. Continental Airlines has confirmed it’s testing the procedure at a gate at its hub in Houston Intercontinental. It’s the first experiment at what’s called “self-boarding” in the U.S. In self-boarding, passengers — much like customers of the New York City subway— swipe their boarding passes at a kiosk reader at the gate. That opens a turnstile or door to the jet-bridge. Although an agent isn’t there to take the pass, one is typically present to handle problems and other customer service tasks. Continental declined to provide further details on its experiment. The Transportation Security Administration, which is in charge of air security, “determined it does not impact the security of the traveling public,” says Greg Soule, a TSA spokesman, adding all passengers are screened at airport checkpoints prior to arriving at boarding gates.

Lufthansa tells USA Today that self-boarding is “only a little faster” but frees up gate agents to help passengers with other problems. I doubt that’s Continental’s plan.