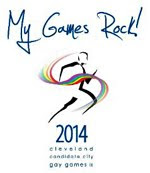 The future of the 2014 Gay Games in Cleveland is in question after the city announced that it was halting all funding of the event. This move follows the termination of the sponsoring sports group’s contract with the Federation of Gay Games. Outsports has the letter from the city. The Advocate notes that last week groups from DC and Boston alleged improprieties in the way that the Cleveland group won the bid to host the Games.

Previous Teabaggers Vs. Teabaggers
Next A Chinese Take On Steve Jobs