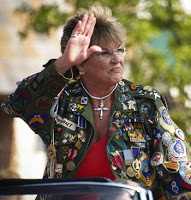 The original Queen of Hate, Anita Bryant, will be slithering out of whatever sewer she’s been hiding in all these years to appear at an anti-gay event in Oklahoma tomorrow. Gossip Boy reports:

The controversial Queen of Gay Hate, Anita Bryant, will be returning to the stage on July 9, 2010 for a patriotic performance in Yukon, OK before an Oklahoma-based group that has become nationally known for its malevolent attacks on gays and whose members include the husband of leading homophobe State Rep. Sally Kern. Bryant’s appearance is part of a two-day conference spanning July 9th and 10th calling for a return to America’s Christian heritage, a crusade against Muslims and gays, and will coincide with the first ever Patriot Pastors Tea Party. The headliner for the event is the widely discredited David Barton, who, to push his Christian heritage agenda, has been caught numerous times fudging history and fabricating quotes that he would then claim were made by the Founding Fathers. Barton has gained criticism for speaking at Christian Identity gatherings that called for the execution of homosexuals.