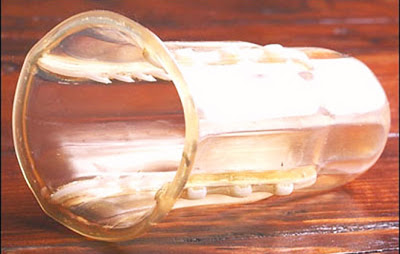 A South African doctor has invented a female condom barbed with sharp teeth. The device is meant to be worn by women as a rape deterrent.

According to Human Rights Watch, South Africa has one of the highest rape rates in the world, and many women in the country live in constant fear of being attacked. One South African doctor, Sonnet Ehlers, is saying enough is enough — she sold her house and car to finance and invent a female condom laced with sharp tooth-like hooks that clamp onto an attacker’s penis upon penetration. The design is controversial, with many saying that the device is a “medieval” solution, but Ehlers believes it’s a way to make rapists think twice about the crime they’re about to commit. Called Rape-aXe, the female condom is inserted by a woman much like a tampon. Of the effects of the condom on an attacker, Ehlers explained, “It hurts, he cannot pee and walk when it’s on. If he tries to remove it, it will clasp even tighter… however, it doesn’t break the skin, and there’s no danger of fluid exposure.” Further more, only a doctor can remove Rape-aXe once it’s lodged on, meaning that hopefully, police can be on standby to make an arrest when the injured assailant look for medical help.

Critics say that the Rape-aXe may cause even more violence by a woman’s attacker.