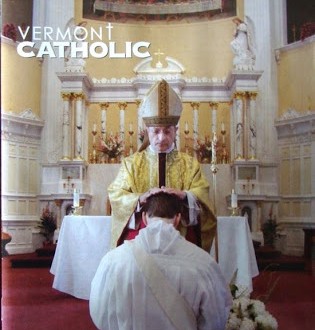 Take This And Eat It The Plaid Crew comments on the new issue of Vermont Catholic:

This is the actual cover of the current issue of Vermont Catholic magazine, the monthly publication put out by the Diocese of Burlington. No joke. Less than a week after an almost-$18 million settlement with the remaining 26 plaintiffs (you know, all those kids who were diddled by priests for decades while the Church pretended it didn’t know what was going on?), these guys put a photo of a young man kneeling in front of the Bishop on the cover of their damn magazine. Given the context, this is a loaded (PUN!) image, and someone in the chain of command should have caught this.