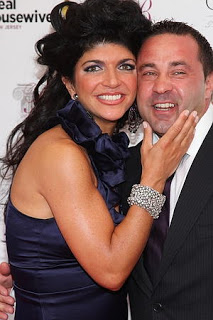 Here’s some “real” insanity. Teresa Giudice, the bling-loving fake-boobed star of The Real Housewives Of New Jersey, has filed for bankruptcy. And court papers reveal that although Guidice and her husband only make a combined $80K annually, they are a staggering $11M in debt.

The Giudices say they owe creditors $10,853,648.04. Teresa, known for her lust for designer clothes and expensive bling on the Bravo show, owes nearly $20,000 on credit cards for Bloomingdale’s, Nordstrom and Neiman Marcus. In total, the Giudices show $104,000 in debt on at least eight credit cards. The bank has moved to foreclose on the Giudices’ $1.8 million, 10,500-square-foot, eight-bedroom, 5½-bath marble-and-onyx manse in Towaco, NJ, the couple moved into during the first season. Teresa and Joe defaulted on their $1,280-a-month payment for the family’s ubiquitous black Cadillac Escalade. They also didn’t have insurance on the massive SUV, according to GMAC. Teresa — who this season told Joe to get a vasectomy — owes $12,000 to a Garden State fertility clinic. Banks have taken the couple’s $279,000 four-bedroom Jersey Shore house. The Giudices had three mortgages on the house and owed $325,000. The couple also handed over a $200,000 home in Lincoln Park, NJ, that had four mortgages — and an outstanding debt of $600,000. Teresa and Joe owed another $1 million for property in Clifton, NJ, that has been given back to lenders.

All of the women on all of the incarnations of the series are bitter social climbers who try to outdo each other with increasing larger tacky mansions, designers clothes, designer faces, and ostentatious parties for their children. Many have the women have been found to have profound financial difficulties, including bankruptcies, home evictions, and salary liens. But the real story here is our banking system, which allows someone to accrue debt to the tune of 100x their income.