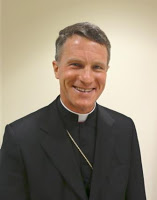 “For years, those struggling with alcoholism have benefited from Alcoholics Anonymous. Like homosexuality, there is rarely a cure. There is a control through a process, which is guarded by absolute secrecy. It is an equivalent to ‘Don’t ask, Don’t tell’. The process has worked well for some time without the charge that it is discriminatory.

“The Archdiocese for the Military Services-the only jurisdiction charged with the pastoral care of all Catholics in the military, VA Administration, and at the service of the Federal Government outside of the boundaries of the United States, which is also charged with endorsing Roman Catholic priests, urges the Congress not to repeal the current policy for the Armed Forces.” – Archbishop for Military Services, Timothy Broglio, comparing gays to alcoholics in a column for Catholic Online.

In the above-linked column, Broglio also calls gay sex a “grave depravity” and repeats the Vatican line that homosexuals are “intrinsically disordered.”