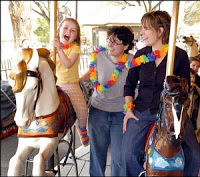 According to a just published 20 year study, lesbians tend to be fantastic parents. But you knew that.

When compared to teens of the same age, adolescents raised by lesbian parents are doing just fine socially, psychologically and academically, new research finds. Not only that, they have fewer social problems, and less aggressive and rule-breaking behaviors than other teens. The nearly 20-year study has followed 78 teens since their lesbian mothers were planning their pregnancies, and concluded that these children “demonstrate healthy psychological adjustment.” These findings stand in contrast to what some vocal opponents of gay or lesbian parents might have expected.

“One of the things that opponents of the equalities of gays and lesbians — in marriage, parenting, adoption and foster care — often bring up is the so-called gold standard of parenting, which defined by them is the traditional family where children are conceived in traditional ways and not through insemination or surrogates. But, when we compared the adolescents in our study to the so-called gold standard, we found the teens with lesbian mothers were actually doing better,” said study author Dr. Nanette Gartrell, the Williams Distinguished Scholar at the University of California Los Angeles School of Law.

The study’s authors say they expect that a study of gay male parents would yield similar results.

Previous Ted Haggard: I’m A Different Man
Next Take This And Eat It