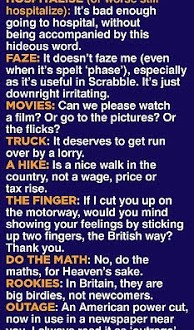 Have A Nice Day

Daily Mail columnist Matthew Engel is sick and tired of American expressions worming their way into the Queen’s English. After an essay on the issue last week, today he posts the Americanisms that most annoy his readers.

Top of the long hate-list was probably ‘Can I get a coffee?’ (and these days it probably would be an overpriced, overmarketed American coffee rather than a nice cup of tea). The answer, says Louisa C., is no ‘. . . unless you are planning to clamber over the counter and start fiddling with the steam spouts’. It was closely followed by ‘I’m good’ as opposed to ‘I’m very well, thank you’. This phrase is even more infuriating when used as an alternative to ‘No, thanks’, in declining a second helping. ‘I just want to yell, “NO, you are NOT good – you might be really, really BAD,” ’ wailed Patsy Holden. Other leading hates include ‘snuck’ as the past tense of ‘sneak’ and ‘dove’ as the past tense of ‘dive’; driver’s license instead of driving licence; overly rather than over; autopsy for post-mortem; burglarized instead of burgled; filling out forms instead of filling them in; fries for chips; chips for crisps; and food to go as opposed to take away. There is also period instead of full stop; and of course ‘Hi, guys’, guys in this case being of either sex. These last two usages are associated with Tony Blair, which seems to redouble the irritation factor. Not everyone suffers in silence. Martin Levin of London E4, says he keeps emailing Radio 2 to remind them there is no k in ‘schedule’, as does Keith Rodgerson, whose verbal enemies list is so long he can’t have time for much else other than letters of complaint.

I can’t be arsed to list all the Britishisms that annoy me. Plus I don’t want to get up the noses of our lovely UK readers.