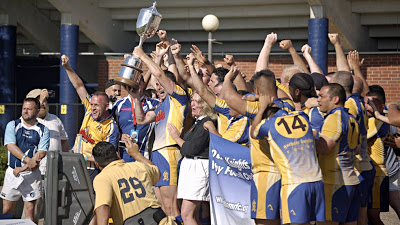 The New York Gotham Knights have won the Bingham Cup 2010 against the Sydney Convicts by a final score of 18 to 15. It was a closely fought battle with three lead changes throughout the game, and Sydney missed a penalty kick (like a field goal in American football) at the end of the match, which would have sent the match into overtime if it was made. Other winners of the three-day tournament included the Los Angeles Rebellion (Bingham Plate), Sydney Convicts B Team (Bingham Bowl), Dublin Emerald Warriors (Bingham Shield), Phoenix Storm (Alice Hoagland Crest) and Seattle Quake B Team (Bingham Spoon). Members from 30 clubs attended, with 24 teams fielded in the tournament, and the Minneapolis Mayhem Rugby Football Club were fantastic as hosts of the well-executed tournament.

The tournament is named for Mark Bingham, the openly gay rugby player who is believed to be one of the passengers who fought back against the hijackers of United Airlines Flight 93 on September 11th, 2001.