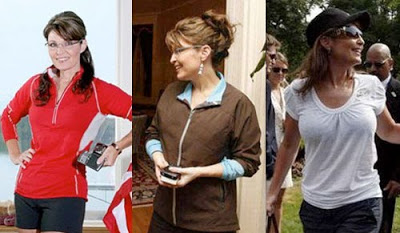 Did Sarah Palin Get A Boob Job? After Sarah Palin’s appearance at the Belmont Stakes in New York this weekend, gossip sites are atwitter over her seemingly much larger boobs. Jezebel is indifferent:

Goofy/immature euphemisms aside, whether or not Palin gave herself a new set of breasts isn’t really our concern — and even if it were, we couldn’t definitively make a call on the matter, given the everyday miracles performed by push-up and t-shirt bras. With the exception of Andrew Sullivan, who will no doubt be thrilled to question the legitimacy of something other than Palin’s uterus, does anyone actually care whether she got a boob job or not? The truth here is a distant second to the question’s mere existence, which should keep the web running on punchline fumes for at least a day or two

But Wonkette seems convinced that work was done.