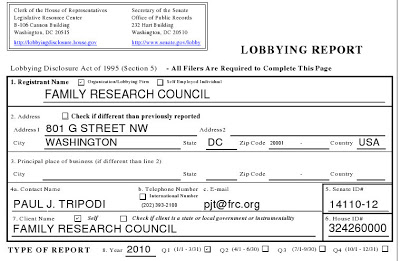 It’s time for the Southern Poverty Law Center to reclassify the Family Research Council as an official hate group, not merely anti-gay as they are now listed. According to the FRC’s official lobbying report for the first quarter of 2010, they paid two of their henchmen $25,000 to lobby Congress against approving a resolution denouncing Uganda’s plan to execute homosexuals. The resolution passed in the Senate on April 13th, but remains languishing in the House almost four months after being referred to the Foreign Affairs Committee. Did the FRC’s lobbying kill it? As we learned last week with Malawi, international pressure CAN sway even the most virulently anti-gay government.

Below are three screencaps of the 20-page Family Research Council lobbying report supplied to me by Duncan Osbourne at Gay City News. Among the other items they lobbied against are the overturn of DADT and DOMA, which is to be expected. But it’s almost astounding, almost, that they would lobby the members of Congress against denouncing the death penalty for LGBT people. THIS needs to fucking THROWN in Tony Perkins’ and Peter Sprigg’s smirking faces the next time they appear on cable television to speak in soothing voices about the FRC’s godly gentle love for homosexuals. The proof is right below on official United States government stationery. The Family Research Council wants you DEAD. Glory! Praise His Name! Also: Die, faggots, die! Previous LGBT HISTORY: HIV Story Telling Video Booth To Launch For San Francisco Pride
Next Did Liberty Counsel Smuggle Lisa Miller And Her Daughter Out Of The Country?