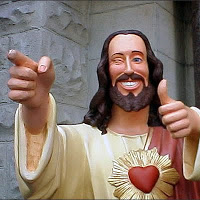 Comedy Central is considering green-lighting a proposed animated show about Jesus Christ. And Christian groups are already gearing up for a boycott of advertisers. Via the American Family Association:

Christian groups are rising up as a team to oppose a new Comedy Central program that denigrates Jesus. The main character of the animated project is Jesus, who lives in New York and is intent on breaking ties with his “powerful but apathetic father.” “You can imagine the mockery and blasphemy and sacrilege that will go on with that, and so American Family Association [AFA] has decided to join other groups to speak out strongly against this,” explains AFA president Tim Wildmon. “In fact, we would consider a boycott of the sponsors of this program.” He is quick to point out that a few weeks ago, Comedy Central edited out a segment from South Park that was disrespectful of Mohammed after a Moslem activist group complained. Wildmon, along with those in the Coalition Against Religious Bigotry, feel that creates a double standard.

The proposed show is titled JC.