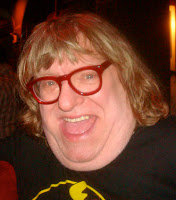 A Chat With Bruce Vilanch Comedian, Broadway performer, and writer for the stars Bruce Vilanch has been all over New York City this week, hosting the NYC Pride rally in Central Park and performing at Sunday night’s 20th annual edition of Broadway Bares.

This Saturday he’ll be reading at a special gay pride edition of Celebrity Autobiography: In Their Own Words, the hilarious series in which stars read verbatim from the often tragically funny self-tomes of fellow big shots. Bruce called me yesterday and responded to a series of questions provided courtesy of some of my Facebook followers.

Do you consider yourself a bear or a bear icon? BV: “Well, I was asked to be on the cover of Bear Monthly! Finally I know what it’s like to be objectified! But I’m not my own type. I’d have to be talked into doing me.”

What do you think of the shout-out LCD Soundsystem gave you on their single “Pow Pow”? They kind of use you to attack Michael Musto. BV: “I was stunned, amazed, flattered and I went right out and bought the CD.”

Who’s the biggest dick you ever had to work with? BV: “Definitely Jeff Stryker. He’s short, but not when he’s lying down.”

You co-wrote Eartha Kitt’s disco classic “Where Is My Man?” Do you still get residuals for that? BV: “I do! And now the checks come in Euros! I’ve never performed the song, though, because Eartha would have killed me. Maybe now that she’s dead….”

When are you going to grow back your famous beard? (Which was shaved off to perform in drag as Enda Turnblad in “Hairspray.”) BV: “I’ll grow it back when somebody pays me to. But I’d love to do a revival of the show.”

Which celebrity do you most regret pissing off? BV: “Barbra Streisand. I talked about her legendary cheapness in my book Get Bruce and she issued a statement denouncing me.”

Which celebrity have you worked with the longest? BV: “Bette Midler, for 40 years. Which is difficult because she’s only 32.”

What’s your favorite Paul Lynde story? BV: “I don’t really have a favorite one. Most of the good ones I can’t repeat. And involve alcohol.”

I’d love to see you and Harvey Fierstein write a book or play together. Would you work with him? BV: “Of course. But Harvey hasn’t needed my help yet.”

You were in an episode of “Bosom Buddies.” Did you get to see Tom Hanks naked? BV: “I ate a hot dog in that episode. But it wasn’t Tom’s.”

How many T-shirts are in your famous collection? BV: “About 3000. I keep them in the Shady Pines Home For Aged T-Shirts.”

What would do you do about the Gulf oil spill? BV: “I think we should use whatever Antonio Banderas uses to control all that oil on his hair.”

Who was the inspiration for your character in Diana Ross’ “Mahogony”? BV: “Kay Thompson.”

What do you think about Elton John performing at Rush Limbaugh’s wedding? BV: “Elton goes where the money is, which is why he has so much of it. I think he and Rush found common ground somewhere. Like at the buffet table.”

Are you available? BV: “Honey, I’m available with a capital “A.” Like a scarlet letter.”

Is Whoopi Goldberg a lesbian? BV: “Oh, she’s been to the carnival. But there’s a long line of white men who can attest otherwise.”

Who are you reading at “Celebrity Autobiography”? BV: “I’m reading Star Jones. And maybe Beyonce. Whoopi likes to say I’m a closet negress.”

Celebrity Autobiography takes place on Saturday at the Gramercy Theater. Get tickets here. Joining Bruce Vilanch at the show will be Cheyenne Jackson, Mario Cantone, John Cameron Mitchell, BD Wong, and others. You can also catch Bruce all this month on Showtime’s Gay & Lesbian Comedy Slam.

Previous What Would PrEP Mean For Safer Sex?
Next Michael Steele: I Am Almost Confident That Jobs Were Created By Dubya