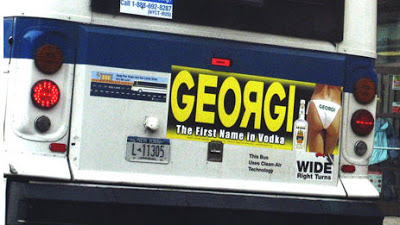 The MTA has caved to pressure from Brooklyn’s Hasidic Jews and yanked the ad campaign from a vodka company that features a woman’s butt in a bikini. An MTA rep tells Gothamist:

“At the request of community leaders, the Georgi vodka ads were removed from buses that are likely to serve Brooklyn’s Hasidic neighborhoods. It has been our longstanding practice, when and where possible, to be sensitive to neighborhood concerns about potentially suggestive advertising. Although it is not always practicable, we try to limit more suggestive ads upon neighborhood request.”