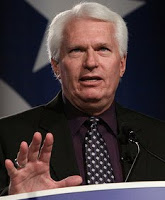 Yesterday Britain’s tabloids claimed that the Taliban is planting HIV-laden needles in its bombs in order to infect British and American soldiers. Reportedly, bomb teams have been issued Kevlar gloves to deal with the threat. Cue American Family Association radio host Bryan Fischer.

If we connect the dots here, the inescapable conclusion is that gay sex is a form of domestic terrorism. Every time an HIV-infected male has sex with another male, it’s essentially the same as plunging an infected heroin needle into his arm. He’s passing on a potential death sentence, just as the Taliban seeks to do on a foreign battlefield. It is because of the risk of HIV transmission that the FDA will not allow a male homosexual to donate blood if he has had sex with another male even one single solitary time since 1977. The second riskiest behavior for HIV infection is injection drug use. Now if gays are allowed into the military, they will be inevitably be put in battlefield situations where donated blood from soldiers may be necessary to save the lives of wounded comrades. An HIV-infected American soldier whose blood is used in those circumstances may very well condemn his fellow soldier to death rather than save his life. If open homosexuals are allowed into the United States military, the Taliban won’t need to plant dirty needles to infect our soldiers with HIV. Our own soldiers will take care of that for them.

Last month Fischer claimed that repealing DADT would lead to another Holocaust, because gay men are the only people savagely brutal enough to murder millions.

Previous American Idiot
Next Tired Old Queen At The Movies #35