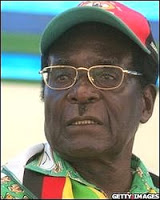 Two gay activists in Zimbawe have been arrested and charged with “undermining” the regime of the country’s notorious dictator, Robert Mugabe. The charge apparently arises from an anti-Mugabe letter from former San Francisco Mayor Willie Brown, which was reportedly displayed in the pair’s office.

Ellen Chademana and Ingatius Muhambi of the Gays and Lesbians of Zimbabwe pressure group were arrested on May 21 after a police search of their offices in the capital, Harare, Kumbirai Mafunda, a lawyer with Zimbabwe Lawyers for Human Rights, said in a telephone interview from the city today. “Police allege that Chademana and Muhambi displayed a plaque from former San Francisco Mayor Willie Lewis Brown in their office in which the African-American denounces President Robert Mugabe’s homophobia against gays and lesbians,” he said. In 1995, Mugabe told a crowd including diplomats that homosexuals were “lower than pigs or dogs.” He has been the target of gay-rights activists on trips to Europe. Police spokesman Wayne Bvudzijena confirmed that Chademana and Muhambi were in police custody, though he declined to discuss the charges against them. Chademana and Muhambi also face charges of possession of “indecent material,” Mafunda said

RELATED: Mugabe’s regime routinely dispatches its opponents by murdering them. Zimbabwe’s economy is among the worst is the world, in 2008 its inflation rate was 89.7 sextillion percent.