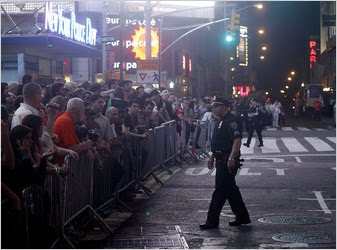 Times Square was evacuated and several Broadway shows were canceled last night after police found an unexploded bomb inside of a burning car.

“It appears to be a car bomb left in a Pathfinder between Seventh and Eighth” Avenues on 45th Street, said Deputy Commissioner Paul J. Browne, the Police Department’s chief spokesman. The device, he said, contained “explosive elements” that included “propane tanks, some kind of powder, gasoline and a timing device.” “This is very much an active investigation,” he said. The police would not say whether they had any suspects, and did not say if they had determined what might have been behind the event.

A federal official said it was not considered it a terrorist threat and that the New York Police Department had told the Department of Homeland Security to stand down. The official would not say why he believed that or what the New York Police Department told them about the episode. The explosive materials were discovered about 6:30 by a mounted police officer who saw a box with smoke pouring from it in the back of the Pathfinder, Mr. Browne said. The officer called for backup, and the Fire Department and bomb squad. The Pathfinder’s back window was broken out, Mr. Browne said, and the police sent in a “robotic device” to “observe it.”

Most Broadway shows went on as scheduled but played to half-empty houses as ticket holders could not get past police barricades.

UPDATE: The New York Post notes that the SUV was parked outside of headquarters of Viacom, the owners of Comedy Central’s South Park.