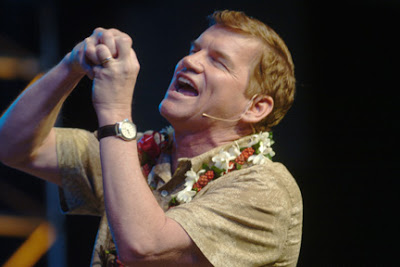 The world’s second-most famous rentboy patron (for the moment) has incorporated a new church in his hometown of Denver.

Ted Haggard, the deposed founder of the New Life megachurch, told the Gazette newspaper on Tuesday that the incorporation of a new church on April 29 was done for accounting purposes — tracking reimbursement of travel costs as they speak at churches and other venues around the country. Haggard predicted to the Gazette that he would return to some form of ministry someday, and he wouldn’t rule out that St. James — whose name is derived from a verse in the Bible’s Book of James that states “faith without works is dead” — might one day be a real church.

In January, Haggard and his wife Gayle appeared on Oprah to announce that he’d been cured of the gay (and to promote Gayle’s book.)