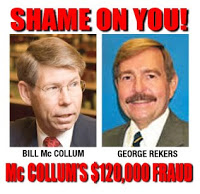 In McCollum’s first statements he stood by his discredited witness, even as right wing organizations were scrubbing Rekers from their websites. As scrutiny of his financial dealings with Rekers deepen, he is scrambling to distance himself. Just as in Florida, Rekers billed the Arkansas Department of Health and Human Services more than twice his $60,000 retainer. But here’s the difference: Arkansas stood up to him, took him to court and ended up paying only what they’d agreed to initially. Why did McCollum pay without question and without requiring any documentation from Rekers of what the extra charges covered? Why was he so eager to hire a discredited witness at an unprecedented cost in the first place? It is time for a full investigation. We have a right to know if taxpayer money was distributed improperly, perhaps even fraudulently. It’s time for McCollum to come clean.

Thanks to you, McCollum no longer allows wall postings on his Facebook campaign page, but you still get in your shots in the comments.