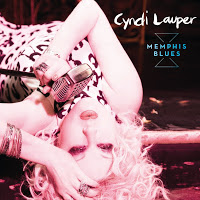 Iconic performer and musical chameleon Cyndi Lauper will release Memphis Blues on June 22nd on Downtown Records. The collection of blues cover songs, recorded this March at Electraphonic Studios in Memphis, Tennessee, features appearances by such great artists as B.B. King, Jonny Lang, Allen Toussaint, Ann Peebles and Charlie Musselwhite. “This is the album I’ve wanted to make for years,” said Lauper. “All of these beautiful songs, and all of the great players on the album, were carefully chosen because I’ve admired them my entire life. And I knew from the moment Alan Toussaint hit the keys in ‘Shattered Dreams’ that we were creating something really special.” The feel of Memphis Blues is gritty and full of life. It bristles with the kind of energy that earmarked the hit singles invented on the fly at Stax Records, the historic and spiritual prototype for Electraphonic, where musicians of multiple generations work side-by-side creating soul-driven anthems for the brokenhearted, the unrequited, and the overlooked.

Hit the link for a free MP3 download from Memphis Blues. Enter to win one of five free copies of Memphis Blues by commenting on this post. Only enter once and please leave your email address in the text of your post. Entries close at midnight on Thursday, west coast time. Publicists: If you’d like to take part in Swag Tuesday on JMG, please email me.