Quote Of The Day – Cynthia Nixon 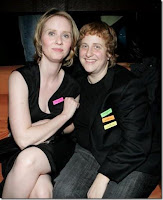 “She’s basically a short man with boobs. A lot of what I love about her is her butchness. I’m not saying I fell in love with her in a sexually neutral way. I love her sexuality—it’s a big part of what I love about her—but I feel like it was her. It wasn’t something in me that was waiting to come out. It was like, This person is undeniable. How can I let this person walk by? Christine would probably kill me for saying this, but my daughter said one time that if you really had to break this down, [it looks like] she would be butch and I would be femme…but really once you get to know us it’s really the opposite.” – Sex And The City star Cynthia Nixon, talking to the Advocate.