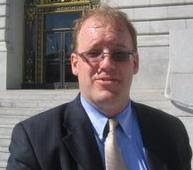 “If Kagan is practicing immoral sexual behavior, it reflects on her character as a judicial nominee and her personal bias as potentially one of the most important public officials in America. The popular mantra — even among conservatives — is that Kagan’s sexuality is ‘irrelevant.’ But a Justice Kagan would help decide some critically important constitutional issues dealing with: homosexual ‘marriage’ as a supposed civil right; religious liberty and freedom of conscience; and the First Amendment as applied to citizens’ right to oppose homosexuality. So it certainly matters if she, as a lifetime judge, could emerge as a crusading (openly) ‘gay’ advocate on the court.” – Peter LaBarbera, demanding that SCOTUS nominee Elena Kagan declare whether she has “personal interest in lesbianism.”

LaBarbera has remained notably silent about his butt-buddy Dr. George Rekers, even though a quick search turns up more than ten pages of NARTH citations on his blog.