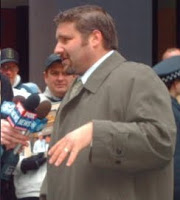 “Whereas every liberal hack on the planet tripped over one another to demand Mark Foley, Larry Craig, Ted Haggard and, most recently, George Rekers divulge the most intimate details of their own bizarre (allegedly) sexual appetites, with Kagan, they’ve suddenly lost interest. Although the mainstream media refuse to do their job, some in the homosexual-activist press are stepping-up to fill the vacuum.

“Homosexual blogger Andrew Sullivan, for instance, writing in The Atlantic, opined: ‘In a free society in the 21st century, it is not illegitimate to ask. And it’s cowardly not to tell.’ But Kagan ain’t tellin’, and the media ain’t askin’. Of course, even if they were inclined to ask, they’d have a difficult time doing so. The White House has Kagan wrapped-up tighter than Barney Frank in a bustier.” – Professional bigot Matt Barber, writing for World Net Daily.

Previous Rep. Alan Grayson On Financial Reform: Too Big To Fail Means Too Big To Exist
Next This Rand Is Your Rand