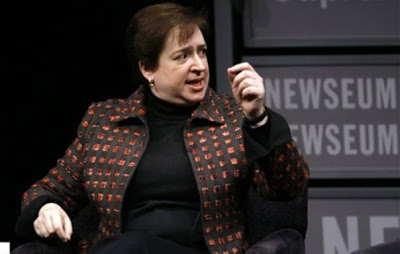 By now you should have heard that the president will be nominating U.S. Solicitor General Elena Kagan to the Supreme Court.

President Barack Obama will nominate Solicitor General Elena Kagan to the Supreme Court, positioning the court to have three female justices for the first time, NBC News reported late Sunday. Kagan served as the Dean of Harvard Law School from 2003 to 2009. She was widely viewed as a front-runner when Obama was considering candidates for a Supreme Court opening last year, but the president ultimately chose Sonia Sotomayor for the job. At 50 years old, Kagan would be the youngest justice on the court, one of many factors working in her favor. She has the chance to extend Obama’s legacy for a generation.

While the dean of Harvard Law School, Kagan banned military recruiters from the campus over DADT. That decision was later overturned by the very body she is now poised to join. Kagan has not yet addressed the rampant rumors that she is a lesbian. The Human Rights Campaign has issued a press release lauding the president for selecting her.

“We applaud President Obama for choosing Elena Kagan to become our nation’s next U.S. Supreme Court Justice,” said Joe Solmonese, president of the Human Rights Campaign. “The U.S. Supreme Court decides cases that intimately affect the lives of all Americans. We are confident that Elena Kagan has a demonstrated understanding and commitment to protecting the liberty and equality of all Americans, including LGBT Americans.” Issues that are critical to the LGBT community may reach the Supreme Court in the next few years, including issues related to marriage equality, the “Don’t Ask, Don’t Tell” law, the Defense of Marriage Act, and the new federal hate crimes law. When issues like these come to the Supreme Court, it is vital that we have fair-minded judges to rule on these cases.

Previous J.R. – Will U Marry Me Boy?
Next Howard Dean Sends Open Letter To Obama Demanding Repeal Of DADT