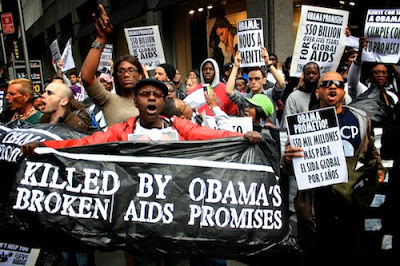 Eight AIDS activist were arrested in Manhattan late Wednesday night in a massive protest outside a $15K-a-plate Democratic fundraiser featuring an appearance by President Obama. Housing Works has the story:

In addition to those arrested, 500 protesters from around the world chanted and marched holding signs reading “No More AIDS Lies! Treat People Now!” and carrying body bags. “While they are inside sipping champagne and caviar, Obama’s broken promises for global AIDS funding mean people will die because they cannot afford a ‘cocktail’ of HIV/AIDS medication,” said ACT UP Philadelphia member Henry Bennett. “Obama gave them hope, then he took it away.” On the campaign trail, candidate Obama pledged to provide at least $50 billion by 2013 for the global fight against HIV/AIDS and to “at least double the number of HIV-positive people on treatment.”

But, as the New York Times reported, Obama’s commitments to fighting AIDS have not even kept pace with inflation, let alone increased to the level he promised. Flat-funding for the U.S. President’s Emergency Plan for AIDS Relief (PEPFAR) means that people who were tested for HIV under U.S.-sponsored programs and promised treatment when they got sick are now being turned away. Although $50 billion was approved for five years, both of the budgets Obama submitted have flat-funded treatment.

Visit photographer Kaytee Riek’s site for many more photos of the protest.