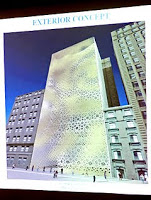 A proposed 13-story mosque and Muslim visitors center to be built near the former World Trade Center site has many in the city taking sides. Last night a Manhattan community board endorsed the project over the loud protestations of 9/11 survivors and others.

The 29-to-1 vote, with 10 abstentions, followed a four-hour back-and-forth between those who said the community center would be a monument to tolerance and those who believed it would be an affront to victims of the 2001 terrorist attacks. The board’s vote was advisory — it did not have the power to scrap plans for a center — but it was seen as an important barometer of community sentiment. Middle school students and rabbis were among the more than 100 people who testified at the hearing, which was held a short distance from ground zero. Some carried pictures of family members killed in the attacks; others brandished signs reading “Show respect for 9/11. No mosque!” C. Lee Hanson, 77, whose son Peter was killed in the attacks, said he opposed the center not because he was intolerant, but because he believed that building a tribute to Islam so close to the World Trade Center would be insensitive. “The pain never goes away,” Mr. Hanson said. “When I look over there and I see a mosque, it’s going to hurt. Build it someplace else.”

Some worry that the building will become the focus of future anti-Islam demonstrations and protests, something not appropriate for the planned 9/11 memorial nearby. Other say the mosque will “bridge and heal a divide” between religious factions in New York City.