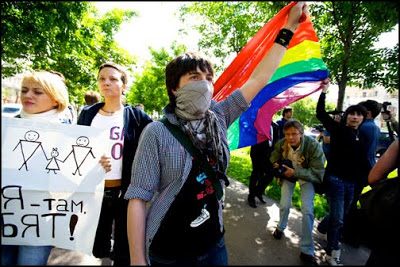 Although the mayor of Moscow has banned gay pride parades for the last five years, today activists defied riot police and staged two small “flash” parades without incident. Strategic planning by the activists managed to keep the events below the radar of anti-gay nationalists and neo-nazis. For once.

Two Gay Pride parades were held without arrests in Moscow on Saturday, the first time the notoriously intolerant Russian authorities have not intervened since the inaugural attempt to hold the event in the capital in 2006. The activists’ spokesman claimed that the absence of harrasment, beatings and detentions was due to their “military planning” rather than any kind of warming toward non-traditional orientation among officials. Moscow riot police typically disperse such gatherings with brute force, emboldened by declarations from city Mayor Yury Luzhkov equating homosexuals with the devil. The activists also blame Russia’s resurgent Orthodox Church, which publicly and sternly denounces gay culture, for fomenting homophobia. About 25 activists held a short demonstration on The Arbat, a pedestrian street lined with shops and cafes that is one of Moscow’s main tourist draws. They marched for about 10 minutes, holding banners and shouting slogans such as “No discrimination on the grounds of orientation.” Some observers waved and laughed, and there were no signs of hostility. Police did not try to disperse the march, but when the demonstrators saw a line of uniformed officers blocking the street ahead of them, they scattered.

British activist Peter Tatchell took part in one of the parades. Tatchell sustained permanent brain damage when he was beaten by Moscow police at a Pride demonstration in 2007.