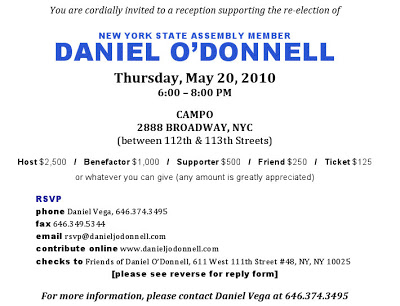 Openly gay New York Assemblyman Daniel O’Donnell will hold a campaign fundraiser in NYC next Thursday. As regular readers know, it was O’Donnell who successfully guided the state’s marriage equality bill through the state Assembly. THREE TIMES, in fact. Embiggen the above image for details about next week’s fundraiser. You can also contribute to O’Donnell’s campaign via his ActBlue page. Danny’s a good man and he’s one of ours. Keep him fighting your battles in the New York legislature.