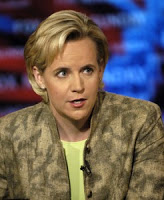 Gay Politics reports that Mary Cheney is part of a group that is working to elect anti-gay Bill McCollum as governor of Florida.

Mary Cheney, the daughter of former Vice President Dick Cheney, is a board member of Alliance for America’s Future, a shadowy group now producing and airing commercials attacking one of McCollum’s rivals for the GOP nomination. Strict rules limit the advertising campaign’s ability to openly support McCollum, but this Tampa Tribune report indicates the group has close ties to the McCollum gubernatorial campaign.

McCollum, should you just be coming out a month-long coma, paid Dr. George Rekers over $120,000 to testify against gay families in a lawsuit intended to overturn Florida’s ban on gay adoption. And Mary Cheney, who has a gay family of her own, wants him to be governor.

Previous HomoQuotable – John Waters
Next The Pleasure Of Your Company