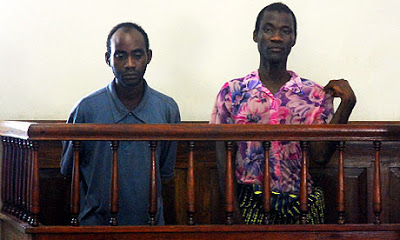 The two gay men on trial in Malawi for holding an engagement ceremony have been found guilty of committing “unnatural acts.”

A judge has found a gay couple guilty of unnatural acts and gross indecency after a trial that has sparked worldwide condemnation of Malawi’s laws on homosexuality. Blantyre chief resident magistrate Nyakwawa Usiwa issued the ruling yesterday. The couple are facing up to 14 years in prison with hard labour after becoming the first gay couple in Malawi to publicly commit themselves to each other. Steven Monjeza, 26, and Tiwonge Chimbalanga, 20, had been jailed since they were arrested on 27 December, the day they celebrated their engagement with a party that drew crowds of curious onlookers. Chimbalanga, 20, and Monjeza, 26, took a historic step when they committed to marriage at a symbolic ceremony in the southern African state, where homosexuality is outlawed. The couple were arrested two days later at their home. Chimbalanga and Monjeza were met with taunts and jeers when they appeared in court to answer three charges of unnatural practices between males and gross indecency. They were denied bail, supposedly for their own safety, and have been forced to endure dire conditions in jail, according to supporters.

Gay sex is illegal in 37 countries across Africa. LGBT rights activists fear the Malawi case may spawn a new wave of prosecutions.