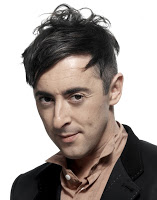 “It is my contention that Ramin Seetodeh is not happy with himself. He has particular shame about being gay. He sees gayness, particularly open and unabashed gayness, or effeminacy, as a reminder of what he does not like about himself. And so he attacks it. His own shame translates into his paralysis when thinking of others who might have his own curse and yet be able to function fully and happily within the rest of the world: a child chasing his friends around a playground in high heels; an actor who he knows is publicly gay but feels he needs to re-out to make himself feel better about his own self-loathing and lack of acceptance of his most basic needs and happiness. As someone who is a only a decade or so immigrant to these shores, I have noticed that shame is one of America’s biggest exports, imbibed more domestically than overseas, and Mr Seetodeh could easily manage its Gay division.” – Alan Cumming, responding to the continuing controversy over Newsweek’s “gays can’t play straight” article.