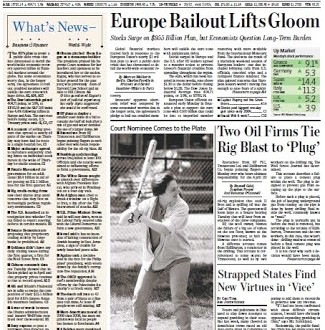 Yesterday the Wall Street Journal published a front page photo of Supreme Court nominee Elena Kagan playing softball. Because that’s what lesbians do, you see. Eliot Spitzer, of all people, has announced that Kagan is not gay because he knows men who have dated her.

“I did not go out with her, but other guys did,” Eliot Spitzer said of his old Princeton buddy Elena Kagan yesterday, joining other longtime friends of the Supreme Court nominee who are reluctantly stepping forward to quash rumors she’s a lesbian. “I’ve known her for most of her adult life and I know she’s straight,” Kagan’s law school roommate Sarah Walzer tells Politico. Kagan dated men during and after law school, Walzer says, but never found the right guy. Walzer and others said they were reluctant to put an end to the rumors that Kagan’s a lesbian because they didn’t want to imply it would be a problem if she were. But with the nominee’s sexuality drawing increasing attention—and a Wall Street Journal cover yesterday showing her playing softball, seen as a jab at lesbian stereotypes—the rumors were “taking away from substantive discussion of the issues,” Walzer said.

Meanwhile wingnuts and some lefties continue their calls for Kagan to address the rumors.