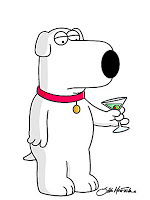 Did Family Guy Cross The Line? Last night’s episode of Family Guy featured a storyline in which Brian Griffin (the dog) learns that the woman he’d been dating was transgender. Brent Hartinger at After Elton fills us in on the plot.

But the second half of the episode is about Brian hooking up with the woman, thinking he’s found his soul-mate, but not realizing she’s transgender. When he’s informed of this, he precedes to vomit for thirty seconds straight; in a sight gag, the whole floor of the room fills up with vomit. “I had sex with her!” Brian says, before screaming like what has transpired is the most disgusting thing imaginable. “When they move to a new place, they’re supposed to notify the neighborhood!” a character says of transgender people. On top of that Peter and Lois say a whole host of shockingly insenstive things including asking what they call “it” now.