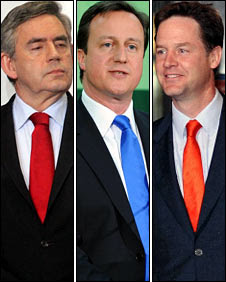 But not in the good way. With no majority won in yesterday’s election, a coalition government will have to be created.

David Cameron has reached out to the Liberal Democrats in an effort to form a government – after the UK general election resulted in a hung parliament. The Tory leader, whose party won most seats but was short of a majority, said he wanted to make a “big open and comprehensive offer” to the Lib Dems. BBC political editor Nick Robinson said it could include Lib Dems in cabinet. Labour leader Gordon Brown has already stressed his party’s “common ground” with the third biggest party. The Tories are expected to get 305 seats, just short of the 326 needed for an outright majority. Labour are expected to end with 255 MPs and the Lib Dems 61. Past practice under Britain’s unwritten constitution sees the sitting prime minister in a hung parliament having the right to make the first attempt at forming a ruling coalition.

RELATED: Northern Ireland Prime Minister Peter Robinson, the husband of the boy-fucking cougar and anti-gay Iris Robinson, lost his seat in Parliament. His loss was quite unexpected. Robinson had been expect to help craft Parliament’s coalition.