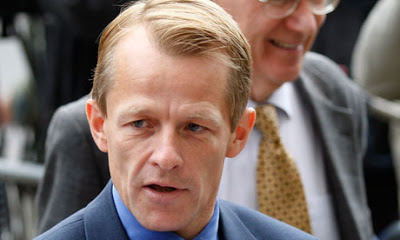 British Treasury Minister David Laws has resigned after it was revealed that he had funneled government money to his partner.

He was one of the stars of the coalition’s first weeks – but now, in just 18 days, he’s become its first major casualty. The former City-high flyer was charged with getting a grip on public spending and implementing savage cuts. He clearly relished the task ahead and, as George Osborne’s Liberal Democrat right-hand man at the Treasury, David Laws confidently grasped a job that others would have been wary of taking on. Two weeks in and he’d already found £6bn to trim. An emergency budget in a matter of weeks and a summer spending review lay ahead. But the £40,000 Mr Laws claimed in expenses for a room he rented from his partner of the past nine years, James Lundie, brought his very brief cabinet career to an untimely end. Mr Laws said he could not now escape the conclusion that what he’d done was in some way wrong, even though he didn’t gain financially from keeping his relationship private. Cabinet and Liberal Democrat colleagues have been quick to describe him as an “honourable man”, pointing out that he’s a self-made millionaire who didn’t go into politics for financial gain. But, given that, it raises the question why did he claim it at all?

UPDATE: I’ve corrected the above headline and text. Laws was NOT out until the scandal broke. My apologies.