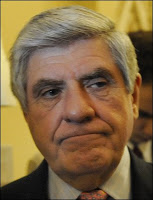 Adam Bink is reporting on Open Left that Sen. Ben Nelson (D-NE) has agreed to be the final necessary vote to move the DADT repeal out the Senate Armed Services Committee and onto the floor for a full vote.

I was told Sen. Nelson’s message is going to be that this isn’t about the next election… what the [Lieberman-Levin] amendment does is “remove the politics and puts the policy at DOD first.” He will emphasize that nothing will happen until after the review is completed and implementation is planned, and that’s the way it oughta be handled. He will further emphasize that the current policy is “just not honest” and “just not the way it should be handled”. Big, big, big news. As I reported last night, Sen. Bayh is a “soft yes”, and if he fully commits, we will have the votes in hand on the Armed Services Committee.

In the House, repeal sponsor Rep. Patrick Murphy says he has the necessary votes to pass the bill.