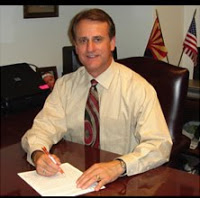 Arizona Electric Official To Los Angeles: If You Hate Us So Much, Cut Off Your Power Angry over the decision to boycott his state, an Arizona power commissioner has sent a letter to the mayor of Los Angeles, daring him to cut off the city’s power supply from Arizona.

In a sharply worded letter to Mayor Antonio Villaraigosa that raises the political stakes for America’s second-largest city, Arizona Corporation Commissioner Gary Pierce noted that Los Angeles gets 25 percent of its electricity from Arizona and challenged the mayor to cut off that supply. “If an economic boycott is truly what you desire, I will be happy to encourage Arizona utilities to renegotiate your power agreements so that Los Angeles no longer receives any power from Arizona-based generation,” Pierce said in the letter. “If, however, you find that the City Council lacks the strength of its convictions to turn off the lights in Los Angeles and boycott Arizona power, please reconsider the wisdom of attempting to harm Arizona’s economy.” The letter was sent to Villaraigosa on Tuesday and provided to Reuters by Pierce’s office. Villaraigosa, who was in Washington on Wednesday for the visit of Mexican President Felipe Calderon, issued a statement in which he declined to take up Pierce’s challenge directly. “The Mayor stands strongly behind the city council on this issue and will not respond to threats from a state which has isolated itself from the America that values freedom, liberty and basic civil rights,” Villaraigosa said in the statement.

UPDATE: LA officials respond: “Suck it, we OWN your damn power plants.”