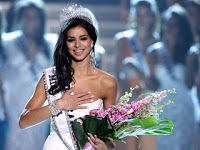 Lebanese immigrant Rima Fakih was crowned Miss USA in Las Vegas last night, becoming what may be both the first immigrant and first Muslim to win the 60 year-old pageant.

Fakih was born into a powerful Shiite family in a village in southern Lebanon that was heavily bombed during the 2006 Israel-Hezbollah war. But she and her sister said the family celebrates both Muslim and Christian faiths and prefer to be referred to as Lebanese, Arabs or Arab-Americans. She moved to the United States with her family in 1993 and attended a Catholic school in New York. Her family moved to Michigan in 2003. Her sister, Rana Faqih, who moved back to Lebanon a few months ago for a new job, said she spent the night exchanging messages with her father, Hussein, and another sister, Ruba, who were attending the competition. “It was a beautiful surprise,” she told the Associated Press from the family’s native village of Srifa in southern Lebanon. “It was not easy for Rima to reach this title.”

Predictably, wingnuts and teabaggers are claiming that the contest was rigged. (Probably by our Kenyan president.) Noted loon Debbie Shlussel is already screaming that Fakih is a supporter of Hezbollah. First Carrie Prejean, now this. Beauty pageants used to be so boring!