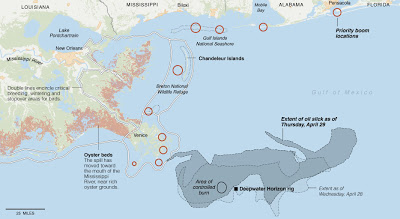 The Gulf oil spill is shaping up to be the worst environmental disaster in American history. Fumes are now overwhelming the residents of New Orleans as the leading edge of the spill reaches the fragile marshes of the Mississippi delta. Compounding the disaster, poor weather has forced the Coast Guard to suspend their containment attempts. National agencies are mobilizing across the Gulf Coast.

Calling it “a spill of national significance” that could threaten coastline in several states, Homeland Security Secretary Janet Napolitano announced the creation of a second command post in Mobile, Ala., in addition to the one in Louisiana, to manage potential coastal impact in Alabama, Mississippi and Florida. Interior Secretary Ken Salazar ordered an immediate review of the 30 offshore drilling rigs and 47 production platforms operating in the deepwater Gulf, and is sending teams to conduct on-site inspections. Gov. Bobby Jindal of Louisiana declared a state of emergency and to request the participation of the National Guard in response efforts.

A coastal flood warning was issued for Hancock County, the furthest county west in Mississippi, while coastal flood watches were set up in nearby Plaquemines and St. Bernard parishes in Louisiana since tides were expected to be two to three feet higher than normal. About 40,000 feet of boom had been placed around Pass-a-Loutre, the area of the Mississippi River Delta where the oil was expected to touch first, a spokesman for Mr. Jindal said. The Navy provided 50 contractors, 7 skimming systems and 66,000 feet of inflatable containment boom, a spokesman said. About 210,000 feet of boom had been laid down to protect the shoreline in several places along the Gulf Coast, though experts said that marshlands presented a far more daunting cleaning challenge than sandy beaches.

The still-uncapped well continues to spew more than 200,000 gallons of crude oil each day. The surface slick is now bigger than the island of Jamaica.

VIDEO: President Obama says “BP is ultimately responsible, under the law, for paying the cost of response and clean-up operations.”