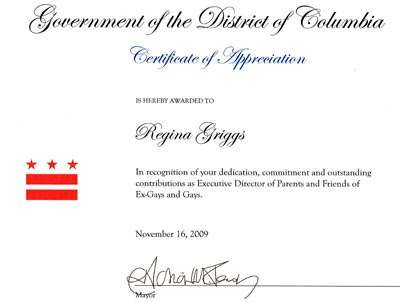 Christian Newswire is crowing this morning about a certificate of appreciation given to the leader of the nasty “ex-gay” group PFOX by DC Mayor Adrian Fenty.

The Gay & Lesbian Activist Alliance of Washington DC is NOT happy.

In an open letter addressed to Mafara Hobson, spokesperson of the mayor’s office, Rick Rosendall, vice president of political affairs for GLAA, says: ”PFOX is notorious as a purveyor of junk science which constitutes an ongoing slander against gay people. ”GLAA in the past has defended PFOX’s First Amendment right to express its noxious views, but PFOX certainly does not deserve any honor or recognition from our Mayor.” Rosendall goes on to request three things: an explanation of the honor, a rejection of the ”ex-gay” movement from Fenty, and a description of what Fenty plans to do to undo the perception that he approves of PFOX’s mission. ”Given the Mayor’s record of support for gay families,” Rosendall adds, ”it is painful to see him honor someone with the pernicious record of a Regina Griggs.”

UPDATE: The Washington Post reports that Fenty has issued an apology.

D.C. Mayor Adrian M. Fenty apologized Thursday over his decision to issue a certificate of appreciation honoring the leader of the ex-gay movement, which believes homosexuals can be rehabilitated. Fenty’s statement comes one day after local and national gay-rights leaders demanded to know why Fenty honored Regina Griggs, executive director of the Parents and Friends of ExGays and Gays. Mafara Hobson, a Fenty spokeswoman, called Griggs’ award a “staff-level error.” “We apologize for the error as it runs contrary to the mayor’s vision of a more open and inclusive city,” Hobson said. “The mayor is proud of his ardent support of the LGBT community.”