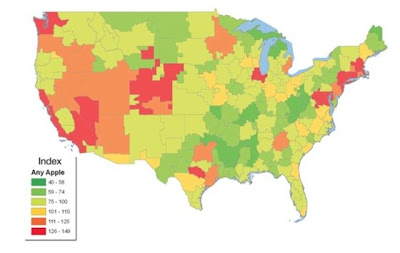 Where The Fanboys Live According to a survey of the 206 top metropolitan areas in the U.S., the #1 market for owning any Apple product is, surprise, the Bay Area. Fortune reports:

In a report issued Friday, Experian Simmons surveyed 206 so-called DMAs (designated market areas, or what we used to call “cities”) and identified those that have the highest concentration of Apple (AAPL) users. The idea was to anticipate in what parts of the continental U.S. consumers were most likely to line up for the new iPad based on their known propensity to own or use iPods, iPhones or Macs. The result is the color coded map shown above and the list of the top 10 markets pasted below (the numbers and the commentary is Experian Simmons’).

Previous Photo Of The Day – Prom Night For Derrick
Next Is the DOD Blocking DADT Repeal?