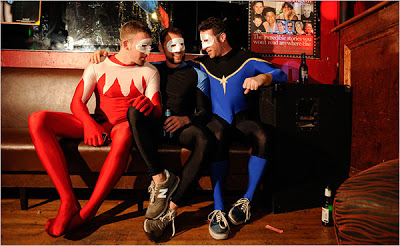 Sworn To Protect A World That Hates And Fears Them The New York Times visits a NYC meeting of gay guys who like to dress up as superheroes.

This is Skin Tight U.S.A., the occasional costume-fetish party held at the Stonewall Inn in the West Village, which draws a regular group of men (and their admirers) who enjoy a special kind of dress-up. Some wear heroic outfits; some, wrestling gear. The crowd can range from 25 people on an average night to 250 on a spectacular one. The common thread is that the muscle-cuddling garb often leaves little to the imagination. “I was always attracted to the superhero physique,” said Matthew Levine, 31, who helped found the party in 2005 with Andrew Owen, 44, and who was one of the few participants willing to be named. The two become friends as, respectively, the graphic designer and Webmaster for Hard Comixxx, a predecessor of Skin Tight, once held at the Eagle bar in Chelsea. Mr. Levine is a big fan of the X-Men (who have a handful of gay characters) and the Transformers (all of whom seem straight) and has been reading comics since he was 8. “As I got older,” he said, “I realized, ‘Oh, this is why I admire the Grecian ideal of manhood and musculature.’ ”

RELATED: Stan Lee is working on bringing a gay superhero to the big screen after Showtime backed out of their option on the character.

UPDATE: The New York Press is wondering about the bulge in the above photo.