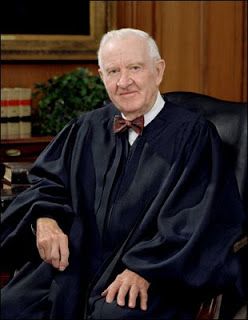 Stevens began signaling a possible retirement last summer when he hired just one of his usual complement of four law clerks for the next court term. He acknowledged in several interviews that he was contemplating stepping down and would certainly do so during Obama’s presidency. Chief Justice John Roberts said in a written statement that Stevens has earned the gratitude and admiration of the American people. “He has enriched the lives of everyone at the Court through his intellect, independence, and warm grace,” Roberts said. Stevens informed Obama in a one-paragraph letter addressed to “My dear Mr. President.” The court released the letter along with the chief justice’s statement on a day when the court wasn’t even in session. According to NBC News, a senior administration official says the White House received the letter this morning. The president, traveling back from an overseas trip, was informed aboard Air Force One.

And now we get to go through the Sonia Sotomayor thing all over again.