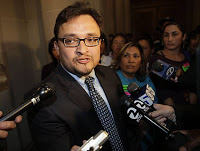 San Francisco Board Of Supervisors To Consider Arizona Boycott The San Francisco Board of Supervisors will hold a meeting tomorrow to consider “emergency legislation” cutting the city’s ties with Arizona.

Supervisor David Campos this morning confirmed that he will tomorrow introduce emergency legislation calling for a San Francisco boycott of Arizona in response to that state’s recently enacted, harsh immigration law. “I feel the city and county of San Francisco has to take a stand against what’s happened in Arizona,” said Campos. “The law they’ve enacted is really an affront to the basic principles of the constitution.” Arizona’s newly minted law makes it a crime to be an undocumented immigrant and brings heavy fines against organizations that hire illegal immigrants. Campos and others, however, claim it will discourage immigrants from reporting crimes to police and could lead to rampant racial profiling of anyone who resembles a Latino. As for what a boycott of Arizona would entail, however, Campos didn’t have many details just yet.

Numerous Hispanic, immigrant rights, and labor groups have also issued calls to boycott Arizona. Phoenix Mayor Phil Gordon says that he will direct city attorneys to sue the state and press for an injunction barring the law from going into effect.