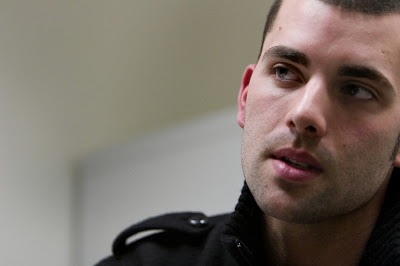 Beau Breedlove, the former paramour of openly gay Portland Mayor Sam Adams, has joined the latest recall effort against him. Controversy over Breedlove’s age at the time of his encounters with Adams nearly brought the mayor down during his election campaign.

Breedlove, who is volunteering with the recall campaign, said in an interview after the rally that other gays and lesbians have chastised him for backing the recall of the city’s first openly gay mayor. Breedlove said that’s precisely why Adams should step down. “He should hold himself to a much higher standard than any other politician, because he’s not just representing the city of Portland,” he said. “He’s representing the GLBTQ community in a new way they haven’t been represented before.” Breedlove said he and Adams kissed before he turned 18 but didn’t have sex until after he turned 18, which is the age of consent. Adams has maintained that no sexual contact took place before Breedlove turned 18. Adams was 42 at the time. The attorney general’s office declined to prosecute Adams, citing lack of evidence. “In reality, he was the one who was in his 40s and he was the adult in the situation. I never felt like a victim until the end, when he continued to lie and threw me under the bus,” Breedlove said Thursday. Breedlove said he and Adams have had no contact since the attorney general’s investigation.

Breedlove parlayed his fame as the mayor’s boytoy into a 2008 nude photo spread in Unzipped Magazine. The recall effort presently has fewer than half of the signatures needed by April 20th to force a vote.

Previous Michele Bachmann: The Census Will Be Used To Round Up Americans
Next Undercover NYPD Cop Rants Outside Of West Village Gay Bar: This Fag Establishment Needs To Be Closed!