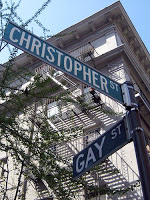 On The Decline Of Gayborhoods Gayborhoods were in their prime when they struck the right balance of seedy and shiny, with porn shops, hourly motels and peep-show joints next door to home decor shoppes, vegan bakeries and restaurants serving foix gras and $15 cosmos. In this way, they became the vanguard of something different, something that’s really more exciting and interesting than gay, per se, and this right at the time that every other place in America began to look increasingly the same. The gayborhoods succeeded in their fundamental mission: to offer safety, community and empowerment. But maybe they succeeded too well, because it turns out other people want that stuff too. Suddenly, everyone wanted to live there. And like avatars on Pandora, that popularity is what killed it. The rainbow flag that gays planted signaled to other assorted demographics – hipsters, liberal-leaning couples with young kids, actual artists, myself – that the neighborhood had been conquered, with flair. So we came, hungry for cheap space and a higher cool quotient. The death may have gone unrecognized by some. But for me, a straight man with a proclivity towards societally marginalized people (and neighborhoods), the kind of gayborhood where I lived has disappeared.

Read the entire essay, it’s both sad and lovely.