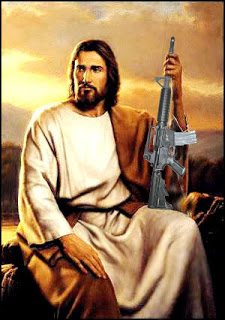 Alternet today features a lengthy essay on the rise of Christian terrorism seen recently via the murders of abortion providers and the resurgence of heavily armed Christian militias.

Christian terrorism has returned to America with a vengeance. And it is not just [Dr. Tiller’s murderer] Roeder. When members of the Hutaree militia in Michigan and Ohio recently were arrested with plans to kill a random policeman and then plant Improvised Explosive Devices in the area where the funeral would be held to kill hundreds more, this was a terrorist plot of the sort that would impress Shi’ite militia and al Qaeda activists in Iraq. The Southern Poverty Law Center, founded by Morris Dees, which has closely watched the rise of right-wing extremism in this country for many decades, declares that threats and incidents of right-wing violence have risen 200% in this past year—unfortunately coinciding with the tenure of the first African-American president in US history. When Chip Berlet, one of this country’s best monitors of right-wing extremism, warned in a perceptive essay last week on RD that the hostile right-wing political climate in this country has created the groundwork for a demonic new form of violence and terrorism, I fear that he is correct.